Caverns of Ekim the Lawful 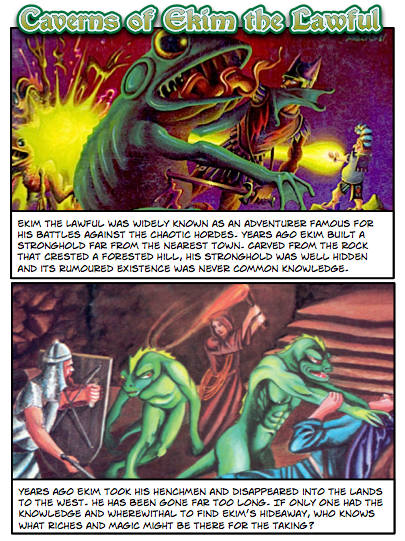 Last Saturday we got some face to face gaming in; rolling dice, pushing mini’s and making juvenile jokes at the npcs expense. It was a whole lot of fun. I haven’t run a face to face game since the play test for Rot Tower so was feeling rusty and a little nervous; which is stupid because I was gaming with guys I’ve been friends with for almost a decade. Mike was back in town and we managed to get a game going with another friend Adam. I’m an old school DM at heart and, as I’d volunteered to run a game, we agreed on AD&D.

Once game day was confirmed I had two evenings to write something. With the internet and my D&D obsession I was spoilt for resources. In the end I used a few really good ones to put the game together. I took B1 ‘In Search of the Unknown’ and used it as a shell. The original map of the dungeon is not great and so I replaced it with a redesign found at the Dragonsfoot forum. I wrote it out in a DMing friendly format as –C talks about here so that the adventure would fit on two pages. I then took some interesting elements and random table results to spice up the dungeon from the Yavin award winning and free Secret Santicore, and the excellent Dungeon Alphabet. Finally I gave the rival humanoid tribes in the dungeon an extra spark by using the 'Random Orc Generator' in Knockspell 6 and Monster Business. Alternative magic items were supplied by a post from Beyond the Black Gate.

Character generation went smoothly though Adam and Mike were unfamiliar with the AD&D books. 4d6 drop 1 down the line. Adam rolled incredibly well and almost qualified for a Paladin. In the end he settled on a Dwarf Fighter/Cleric with amazing saves thanks to a constitution score of 19. The dice were crueller to Mike who ended up with no characteristic bonuses. Mike decided to play a Dwarven fighter. As there were only two players they started at second level with an impressive AC provided by plate mail and shields. They also had 7 pre-generated hirelings to order around thanks to Meatshields!

As we started the game I asked the character’s names. Mike was Bill. I rolled my eyes and rather foolishly suggested Adam call his dwarf Ted. Adam agreed and so Bill and Ted went off on their excellent adventure. I can't seem to run a serious adventure to save myself and so this set the tone for the afternoon. I'm not so worried as the lighter the tone the more fun I have. While the hirelings had names no one took the time to find out what they were. We all knew they weren’t going to last long.

Among the highlights of the session were:
That was great fun. We played for close to 4 hours and by the end I was spent. It reminded me how much I miss face to face gaming. The old groups have broken up with people moving, falling out or having family commitments. I’ve gamed with perhaps a dozen people over the years and it would be great to put a group together again. For now I make do with the weekly Google+ game.