The Enemy Within podcast - putting it together

Remember that awesome roleplaying session from high school? The one you and your friends still reminisce about today? For me it was my first run through Warhammer Fantasy Roleplay's The Enemy Within campaign. This was the first game I had played in that had carried on for more than 2 or 3 sessions. The details of what went down aren't clear anymore, its been 20 years.  While Optimus, Pete and I had considered tape recording our sessions regretfully we never did. So when I decided to run the campaign last year I figured I would record it for prosperity. I was heavily inspired by this The Enemy Within campaign as well as the Fear the Boot podcast. Here's how I make my podcast:

I use a voice recorder app on my smart phone. I place the phone in the middle of the table and let it run. It picks up the clatter of dice, every cough and the squeak of floorboards as people move around the kitchen. The voice levels are a bit off but you can fix that later using The Levelator program.

Once you have a session recorded you need to edit it down to something manageable. You should aim for an episode to be an hour long. I listen to podcasts on the way to and from work which means I can listen to one podcast a day. My friend Optimus had pointed out that my initial recordings were too long and I am in the laborious process of editing the early sessions down. A typical gaming session will be 6 hours long. Once you edit it down you should have 3 x 1 hour long podcasts. There will be in jokes, off topic talk, boring bits like equipment shopping and extended rules look-ups that you will want to remove. I use Audacity to edit the recording. It's free, intuitive and has online support. If you have a Mac then Garage Band is a valid option.

When cutting the sound file down to size I have a blog post on the go. I note down key points and how far in to the recording they occur. Later I go back and flesh them out. Sticking to one tense when writing helps the posts cohesion. After writing a post I might stew on it for a day and re-read it the following day. 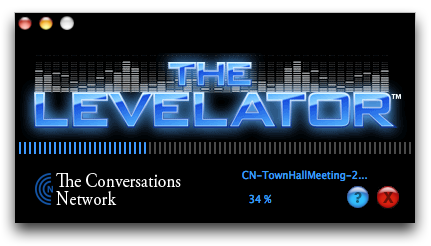 Once I have an hour long episode cut down I run it through another free program called The Levelator. The program is great with voices as it boosts the quiet parts and tones down shouting.

From there I record an introduction on my smart phone and drop it in to the session recording that's been run through the levelator; I do this all in Audacity. While in Audacity I import some back ground music. Fade this music in and out using Audacity. These days I play it safe and use royalty free music. I snagged my introduction music from here.

With the introduction and music added to the session recording I export the file as an MP3. When exporting you get the option to edit the meta-data, things like the track number and date recorded. This is useful information if you plan on uploading the session to iTunes.

I upload the mp3 file to a google drive folder. I can then share the link to the folder so other people can listen if they want. Taking this a step further I embed an audio player in my session blogpost. I follow these instructions to imbed the audio.

It's a long process and I often don't feel like doing it because of the time involved. A 6 hour game session will take 12 hours to edit and blog. Once you get an episode finished it feels like an accomplishment. You now have a record of that amazing session that you can listen to in 5, 10 or even 20 years time.
Posted by Rob_S at 03:17