Mr Papafakis arranged and GM'd a game of Rogue Trader while Tytus was in the country with his excellent Escher models. 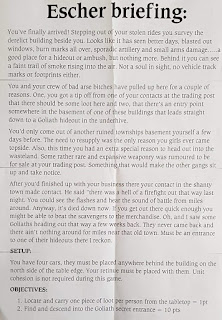 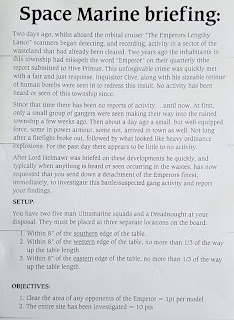 Imperial propaganda held that Anotla station and its surrounds had been purged for a heretical misspelling of 'Emperor' in documents accompanying the monthly tithe. The truth was more sinister. Imperial scientists had been conducting warp experiments that had ended in catastrophe. As a result the site had been cleansed. For years the station lay dormant ... until now.

Imperial light cruiser "The Emperor's Lengthy Lance" had been monitoring the site and had picked up heavy ordinance fire. A squad of Marines were dispatched to investigate and ensure the site remained clear.
As the Marines landed Clan Escher scavengers pulled up in jury-rigged street cars on the outskirts of the ruins. Hearing reports of a viscous firefight the night before that had arrived to loot what they could from the defeated.
The Space Marines had split into two forces. Brother-Captain Janus led a five man team towards the ruins on the left. It was clear that whatever had happened recently had unfolded in the open ground before these ruins. Mangled bodies of chaotics lay strewn about and towering over them with its back to the ruins stood a smoking and sparking bot, its assault cannon swivelling in search of a target.

Believing the crippled bot a serious threat the Marines did their best to avoid its attention. The Contemptor class dreadnought advanced down the middle using the forest as cover while the second squad looked to situate their missile launcher in a ruined tower overlooking the site.

Cyndi, the Escher gangs boss, led the bulk of her gangers towards the carnage strewn ruins hoping to get behind the crippled bot. The Bounty Hunter Hans Olo took the remaining gangers around the other flank. The converted street cars slowly made their way through the trees. Both Marines and gangers were approaching the scene with caution.

Suddenly the lead battle brother in the squad closest to the carnage strewn ruin turned on this fellow brothers and opened up with his bolter. At the back of the line another marine incinerated his brothers with a burst from his flamer. Brother-Captain Janus' final words were 'Witchcraft... Chaos!" which he broadcast across the coms before collapsing in a smouldering heap. In response the Contemptor class dreadnought moved from the tree line and blasted apart a traitor marine with its twin linked bolters.

On the other flank a chaos addled squat had emerged from the forest and into the sites of the remaining marine squad. A krak missile put an end to the miserable creatures life.

Cyndi heard the bolter fire from the other side of the ruins but didn't have line of sight to the marine on marine conflict. She sought a tunnel entrance rumoured to be within these ruins. If she could find them the payoff would be huge and her gangs prestige would skyrocket. Thoughts of riches were the last of her independent thoughts before she and half her gangers turned their weapons on her fellows. Stub gun, shotgun and heavy stubber rounds fired widely as emotionless traitors turned on loyal gangers.


The core of the gang had been gutted and was without leadership. Only a handful of gangers and Hans Olo remained. Another chaotic squat wandered out of the forest toting a grenade launcher, it lined up one of the street cars but took a bolter round to the head before he could fire courtesy of Hans.

The Marines were having a bad time but it was about to get worse. In extracting some measure of vengeance for the loss of Brother-Captain Janus the Contemptor had entered the damaged bots field of vision. Bot 9985987.M2. opened up with its assault cannon rupturing the dreadnoughts cooling system and causing it to detonate. Just five marines remained.


Panicked by Cyndi's betrayal Tiffany the juve fled, jumping into the closest street car and accelerating away. Unfortunately her escape brought her into the open momentarily and Bot 9985987.M2 tore her vehicle's engine apart with a sustained burst of assault cannon fire. She leaped from the damaged vehicle and hunkered down out of sight.
The swiftness with which everything had fallen apart for the both marines and gangers was stunning. The marines entered a 'safe' looking ruin from the north while gangers picked through the opposite section. Their search flushed out a flayed skinned cultist and a massive chaos spawn. The spawn raced towards bot 998598.M2 and the building beyond while the cultist trailed behind sticking to the tree line. The marines had a choice, go after the nearby gangers or pursue the chaos spawn. Chaos, being the true enemy, was prioritised. The marines took cover in forest and bounced bolter rounds off the spawns thick blubbery hide. The idiotic creature grunted in irritation before leaping off towards the ocean never to be seen again, without a leader to provide guidance the stupid thing probably drowned. The flayed cultist made it to the outskirts of the forest but not deep enough to be concealed. He was pursued by the bounty hunter who put him down with a bolter round to the brainpan.
The few remaining marines were conflicted in how to proceed. Clearly something else was going on and it wasn't the Escher scavengers causing it. When in doubt refer back to the mission briefing. Eliminate the enemy, no exceptions. With the dilemma solved Brother Crassius fired a krak missile into a ganger street car turning its engine bay into a smoking wreck. Hans Olo and a nearby ganger Molly returned fire. Molly, armed with a plasma pistol, had the drop on two marines and had them dead to rights but then Tytus rolled terribly and the opportunity was lost. 'Molly' didn't get another chance. A krak missile ended her while a volley of bolter fire wounded the bounty hunter.

Cyndi and the other Escher traitors had moved deeper into the carnage strewn ruins allowing Tiffany to escape. The brave juve hooked up with a ganger pal and the pair edged their way into the forest in front of the ruins hoping to scavenge some armour or weapons from the fallen. Unfortunately their approach saw them enter a sphere of malevolent warp influence and the two juves minds were seized. Their loot forgotten, the possessed pair raised their stubbers and went out to defend the ruins.

Brother Vulcan's head up display was worrying him. It indicated that his target was an Imperial sanctioned bounty hunter. Their true foe was chaos, if anything this bounty hunter should be their ally. Brother Vulcan called out to his battle brothers to cease fire. He walked out into no mans land hailing the bounty hunter. The pair worked out a truce. Credits were transferred and an allegiance shifted. By Hans Olo's reasoning the Escher gang, his employers, were no more. A strict reading of the marine's mission brief meant that they had to 'clear' the area. As long as the bounty hunter quit the field the mission would be complete.
During this momentary lull in the battle bot 9985987.M2 had a system failure and shut down.

The traitorous Tiffany and her juve companion emerged from the forest and began firing stub rounds wildly at the marines. The marines returned fire downing Tiffany's companion. Hans considered helping the scrappy juves but the credits he'd been paid were too great and he never liked those gangers anyway. He left them to their fate.

With the ganger threat neutralised the marines turned their attention to the sinister ruins that had been causing this. Brother Vulcan raised the bounty hunter again on the communicator and a new deal was struck. Hans Olo would assist them in purging the ruins for an additional payment. A sketchy plan was formed involving a vortex grenade and a street car sent on a collision course with the ruins. While both complicated and ingenious the plan was not required as a salvo of krak missiles obliterated the front of the sinister ruin and it collapsed killing all inside.

Tiffany regained control of her mind, groggily she scooped up the chaos squat grenade launcher near her and staggered towards a still running street car. Possession of chaos tainted goods is heresy and so Brother Cassius fired a krak missile into the street car. The resulting explosion took out Tiffany - the sole remaining Escher ganger. The gang truly was no more.
Hans looted a heavy webber from a slain cultist well out of sight of the marines. He furtively stuffed it under his coat and hurried from the field. All in all he'd made out very well from this contract and the webber was a nice bonus.
The surviving marines picked through the rubble uncovering the bloated body of an 'Enslaver'. It seemed that the warp entity had made it through a rift during the disastrous warp experiments at the station. It had seized control of the minds of those who came near instigating their traitorous actions.