Tales from the torchbearer

'It was either the oil or the iron maiden. I chose the oil.' - Ugh in the torture room 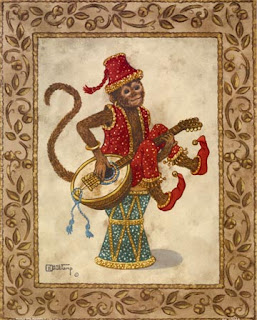 Burne looked up from his ale at the brightly garbed stranger who had a clothed Capuchin monkey perched upon his shoulder. The unusual looking individual took a seat next to him. ‘Can I help you?’ Burne asked.
‘Perhaps you can. I hear you are an adventurer in the employ of Milgos and I am interested in their tales. You see I am a troubadour and I can assure you that I am a minstrel of the highest standing who moves amongst the courts of influential nobles. I have a seat by Lord Winthrop’s fire and regularly regale the noble Lady Witherflank during her mid-day stroll. I shall do your heroic tale the justice it deserves.’
‘5 crowns and I give you a story otherwise bugger off.’ Burne drained his drink and ordered another.
‘It’s a deal. I am interested in your latest expedition. Your group has become popular amongst both the small folk and those of influence and I would give them the latest tale of daring do.’ The troubadour reached into his purse and counted out five crowns placing each on the bar.

Burne began his story. ‘Firstly none of us have agreed on an official name for the group. I like to call us the West Wood Warriors on account of how most of the time I have been with the group we’ve been exploring forests and putting things to the sword. My role is to carry a torch and provide advice and moral support. Milgos will often turn to me for advice on complex puzzles and were I not there to offer guidance I am sure Ugh would have killed everyone in one of his fits of rage. His half orc side often gets the better of him.’

The troubadour frowned impatiently. ‘Yes. I am well aware of the main players in your group. I was hoping to hear of your latest exploits.’

‘We had found a temple deep in the forest that served as a gathering point for a hobgoblin tribe. Folks were talking about the hobgoblins planning to raid across the river so Ugh gets it into his head to stop them. At least that’s what he tells us, we don’t believe him on account of how we see the look he gets when he’s slaughtering things. He’s a stone cold killer, lives for the stuff. We follow along behind the berserker and his dog. Have you seen his dog? Huge brute, infested with fleas, furs sort of falling out and the poor creature is crisscrossed with scars. Looks sort of like his master.’

The troubadour interrupted ‘I prefer to describe Fang in tales as a noble beast with lions blood in its veins.’

Burne frowned. ‘No there’s nothing noble about Fang. Another funny thing about the dog is Ugh speaks to it all the time. He sort of growls and the dog growls back. Ugh’s clearly mad talking to animals.’
‘I’ve heard druids can talk to animals.’ The troubadour explained.
‘Ugh aint no druid. The half orc is a berserker plain and simple. We make our way through the West Wood. I tell Milgos to scout ahead and the elf returns to tell us that there is a bunch of stirges up ahead. Ugh starts mumbling about fish and demands to see them. I try and explain to Ugh that stirges are mosquitoes the size bats but he wont listen. He goes to see the creatures and gets swamped by a flock of them. By the time the rest of us catch up he’s killed most of them. Have you ever seen a stirge die?’
‘Can’t say I have.’ Replied the stranger.
‘They burst like a pigs bladder full of wine. Messy affair. Also on the trail we ran into a giant lizard the size of a cow that I distracted by throwing my voice. You see I made the noise of a rabbit running through the undergrowth, a hunting trick I picked up from my old man. The lizard got distracted and gave chase so we could pass untroubled.’

Unnoticed by Burne the Capuchin monkey had climbed down from the troubadours shoulder and had worked his way towards the retainers coin purse. Burne obliviously continued his tale. ‘It took more than a day hiking through the woods to reach the temple so we had to camp. I took the early morning watch. This was brave on my part as this is the time when most ambushes occur. I warned Janna, who shared my watch, to be on high alert. Unfortunately she didn’t listen and was ambushed by some kind of ghoul. She’s a tough one that Janna and refused to fall to the flailing ghouls limbs. It wasn’t long before the rest of the group awoke and put the creature down. As everyone caught their breath I noticed the creature starting to re-assemble just like a troll. Everyone was stunned but not me; I grabbed a flaming brand from the campfire and set the creature ablaze. “Regenerate this!” I yelled.’
The Capuchin monkey jumped at the sudden shout and scurried back to its spot on the troubadours shoulder. ‘What did your companions do during the fight? What were there tactics?’
‘Milgos slept through the entire thing. He doesn’t like to be woken up unless someone is bleeding to death. He needs his sleep so he can study his book and memorize spells. If you wake him he gets cranky and you don’t want a mage mad at you. Ugh just kept hitting the creature with his sword. Not terribly imaginative but he gets the job done. The next day we arrived at the ruined temple. We used ropes to climb directly into the secluded garden attached to the ruin. That way we could bypass the main entrance which, given our last incursion, would surely be watched by the hobgoblins. I sent Milgos scouting ahead and the mage saw an opportunity to ambush a war band of hobgoblins that clearly had designs to ambush us. He webbed them and then we shot them a lot. They had a pair of ogres that looked like a couple because when one of them died the other got really mad. Being trapped in a web meant they couldn’t do much except curse. We weren’t quiet as we conducted the slaughter and so it seemed the whole temple became aware of our presence. I got sick of shooting the webbed hobgoblins so I figured I’d set the web alight with my torch. The plan worked a treat and incinerated dozens of the creatures. More and more arrived only to be slaughtered. A group of crossbow armed hobgoblins were lured into the killing zone within the temple by Milgos’ skill at impersonating a hobgoblin. ‘We have them on the run.” He called and like the fools they are they believed him. Soon we were standing in a room full of dead enemies with nary a scratch to show for their efforts.’

‘Impressive, your group certainly seem capable of exercising grand strategies. How many would you say you killed?’
‘After the reserves arrived and were butchered I’d put the number of dead at close to 40 including the ogres. The reserves were interesting kills. Betty, who lacks a spine and serves as an extension of Milgos’ will, poured litres of oil along the stairs from which we expected the goblin reserves. As they arrived I threw a torch amongst them setting the oil ablaze. That crisped a few goblin scouts and held the foe back allowing us to set a second ambush which butchered them all.’

‘So what happened next?’
‘Well I knew we had to press our advantage so I advised we charge down the stairs and finish the bastard off. Heeding my counsel we raced down the stairs. One of the dungeons rooms was a torture chamber that, apart from various instruments of cruelty, contained a shivering goblin that I had clearly badly burned with my oil on staircase plan. I suggested we take the creature prisoner as it begged and pleaded for its miserable life but Ugh was deaf to its pleas. He swept in; brushed aside the creature’s puny knife blows, picked the miscreant up like a naughty child and dumped the creature in a vat of boiling oil. The pitiful shrieks will haunt me forever. I nearly quit there and then and I wasn’t the only one. Janna looked close to tears. Milgos was furious. ‘Why did you do that you dolt!” the elf shouted. “The goblin would have talked, he would have told us everything. Why did you have to put him in the boiling oil?”
‘What was Ugh’s response?’
‘The half orc spoke in a tone that would send chills down your spine “It was either the oil or the iron maiden. I chose the oil and I would do so again. Goblins are vermin there to be killed. The creature would have told us anything to save its skin. Besides now it is crunchy and delicious.” Needless to say we all turned our heads in disgust.’

‘Ugh sounds like a real terror.’
‘He is. No one follows him apart from his dog. I heard folks used to hire on to his dungeon expeditions and didn’t come back. Milgos has a solid reputation for keeping his followers alive and he pays well to boot. Anyway we keep exploring the dungeon beneath the temple and Milgos spots a revolving wall. He has a knack for these things. He just walks past a wall, freezes and shouts “There!” while pointing to concealed portals. Beyond the secret door we found a priest. He looked like he hadn’t slept in days and his teeth had been filed to wicked points. He rose to greet us with mace in hand when I gave the signal to Janna. Acting on my instruction she recited a prayer that froze the priest in his tracks. With the priest unable to move it was a simple exercise of removing his head from his shoulders. Ugh took great delight in the task drawing out the decapitation longer than I thought possible. It was clear that the frozen priest was alive for much of it from the look of terror in his eyes. Most of us busied ourselves searching the room while this bizarre torture was occurring.
‘Ugh sound like a blackguard. Surely he is a villain and not a hero.’
‘The priest was dead either way, Ugh just made it painful for the poor bastard. These are monsters we are talking about. They would do the same to us, probably worse. Ugh is bringing justice to them, sure it’s brutal justice but it’s justice. With the priest dead we did kept searching the place finding a temple full of scorpion flies about the size of Fang. We killed them and looted the temple. Did you know that nine out of ten temple statues have valuable gems for eyes? That’s an adventuring fact my friend. After that there’s not much left to tell. We camped in the priest’s secret chamber and readied ourselves for the combats that were sure to follow. Milgos had been keeping track of the dead and reckoned at that juncture that we had killed over half of the Khan’s followers.’

The troubadour stood and made to leave. ‘Thank you my friend. I shall craft your dark tale into one the bards shall sing of for a generation. I shall be at this tavern most nights and will for you. I can assure you there will be more coins waiting for you. But now I must bid you good day, these tales do not write themselves.’ Bowing deeply the troubadour left the noisy tavern behind. He had the information he had come for though the tale was more disturbing than he had expected.
Posted by Rob_S at 04:06