Bugbear surprise and a nods as good as a wink

'From the sounds of bloody murder I take it you dispatched the bugbears.' - Cullen De Filch

The secret garden was the perfect sanctuary in which the heroes were able to rest, heal and prepare themselves for the coming conflict. When ready they ventured forth through the secret door that shielded the garden from the prying eyes of the foul humanoids that infested the corrupted temple. They flung open a nearby door to discover a barracks where a mix of goblinoids rested with only a token guard posted. By venturing during the day the band had caught the nocturnal humanoids unawares. The initial guards were swiftly dispatched with the bands bloodthirsty henchmen leaping into the fray gleefully stabbing at the sleeping creatures. It was bloody murder. A pair of hobgoblins put up a spirited defense while their companions roused themselves from their slumber but it was all for naught. A few of the goblinoids made a dash for a set of stairs leading down found at the end of the barracks. Alas they were cut down just as they began their frantic descent, their corpses tumbling to rest at the base of the stairs.

Milgos slipped on the ring that was never far from his side. He kept it on a chain around his neck so that he would never lose it. It was his most valuable possession. The ring, once worn, turned the wearer invisible and so Milgos began to scout the base of the stairs and the nearby tunnels. Ugh got down to work stripping and looting the bodies, overturning beds and cracking open table and chair legs in the hope that some mad man had hidden something valuable within. His search was rewarded as he discovered a magnificent shield strapped to the arm of a decapitated hobgoblin. Upon the shield was the heraldic device of a dancing boar. Ugh discarded his old shield and replaced it with the new for it was magic and thus quantitatively better.
‘It’s fun slaughtering things.’ Growled Fang in the tongue of dogs that only canines and Ugh could speak. ‘This is easy.’ ‘Yes.’ Replied Ugh “Almost too easy and I do enjoy a good slaughter every now and then.’
Burke jostled Betty speaking softly “Look he’s talking to his dog again. That half orc is a right nutter.” 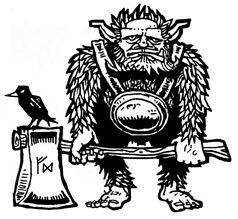 Milgos returned from his scouting expedition. From the numerous tunnels available to explore the group chose to strike west. There they found a sitting room in which a pot of foul looking stew boiled. A quick search revealed little of value so they pressed on. Soon they discovered a small cell containing a bunk bed and other sparse furnishings that they ransacked. Milgos was adamant that something lay in the room and in his failure to find it he toppled over the bunk in frustration. The loud crash coupled with a stream of dark elf curses echoing through the tunnels was sure to draw attention.


Bugbears heard them for it was in this portion of the dungeon that they made their lair. Creeping up on the group from behind a mighty bugbear struck, or would have if I had have rolled decently. Battle was joined and bugbears swarmed in from both ends of the corridor trapping the group. The melee was a bloody affair in which Fang was dealt several vicious blows sending him whimpering back to his master for protection. A savage battleaxe blow to the chest felled Betty. She lay convulsing on the cold stone floor till Jana the cleric swooped in with a timely healing prayer. While his companions lives hung in the balance Milgos has slipped on the ring yet again and had scampered behind the bugbear lines. As the battle turned against them Milgos struck stabbing with his newly acquired magic dagger and running riot amongst the bugbears back ranks. One towering brute turned on the dark elf and struck him a mighty blow. Despite the unfamiliar pain Milgos continued his frenzied assault swing both blades about him like some possessed dervish. The bugbears dropped one by one and yet fought to the death for unbeknownst to the heroes these brutes had were part of a bizarre suicide cult seeking death at the hands of adventurers. With the massacre complete Ugh began looting the still twitching corpses discovering some adventurers gear and a neat axe. Meanwhile Milgos did some more scouting under the cover of invisibility. The dark elf discovered a sealed door which he cautiously inched open. Hearing an unnatural hissing noise from the other side he figured caution was the order of the day and slowly reclosed the door.

Exploring the bugbears portion of the dungeon the group discovered a locked portal. A cultured voice called from beyond ‘I say good chaps, be sports and release me. From the sounds of bloody murder I take it you dispatched the fiendish bugbears whom were my erstwhile captors.’ Milgos set about the lock with his set of picks. The lock was a simple matter for the thief and popped open in no time.
The tall well-groomed prisoner gave his liberators a deep bow. ‘I see you are a man of the trade. An artful dodger if you know what I mean and I think you do.’ The remarkably well-kept prisoner touched his nose twice and tweaked his right ear. He continued to speak in thieves’ cant, a language that left all but Milgos bewildered. ‘Hook me up with a razor and I’ll shiv any burke that hopes to crack your eggs.’
Burke, one of Milgos’ henchmen took puzzled offense at this. ‘Ere, what’s this fancy prisoner talking about me for boss?’
‘Don’t trouble yourself Burke. He is speaking in cant. The language used by thieves.’ Milgos turned once more to the prisoner ‘what is your handle? Which branch are you from?’
“Cullen De Filch from the second pan handlers league at your service. Have you seen my stash?’
‘We have your equipment. You can have it back but we part ways soon. We don’t need two thieves.’
Cullen De Filch skulked to the back of the party where he would have no impact on further events.
‘Hold on a moment’ insisted Jana as she murmured a prayer to her god which granted her the ability to sense evil. Cullen was clean but the helmet Ugh had liberated from an undead treasure horde weeks ago radiated strong evil. Jana made the connection to Ugh’s recent behaviour that was more violent and brutal than ever. She surreptitiously shared her concerns with Milgos but the dark elf dismissed her concerns with a shrug saying ‘Let him be evil if he wants.’

Done with the bugbear passages the group turned their attention south. Once again Milgos led the way shrouded in invisibility. He soon saw the warm glow and heard the clash of hammers that suggested that a forge lay up ahead. Turning a corner he saw close to a dozen hobgoblins and a bugbear overseer forging weapons most likely for the hobgoblin Khan’s army. A sleep spell saw the bulk of the hobgoblins take a nap though by some odd whim of fate none collapsed into anything hot or painful despite their hazardous surroundings. Sadly for the humanoids their surroundings would only become more hazardous as the heroes brought the pain with blade, magic missile and mace. With their foes dispatched the heroes discovered that they had rescued a dwarf whose movement was impeded by a ball and chain attached to his leg. If they were to rescue the stout fellow the ball and chain would have to go. Both Cullen and Milgos attempted to pick the chains lock but failed. Ugh took it upon himself to work the forge and melt and hack the chain apart. Whilst the long task of liberation unfolded the dwarf told them his tale. His name was Ghuran Pickaxe and he had been captured along with his prospecting expedition almost a year ago. He had been made to work the forge and teach the humanoids the secret of dwarven smithing. He knew the hobgoblins were planning a raid soon but was vague on the details.

Felling the need to train, the band returned to the surface, trudged through the West Wood and three days later had returned to civilization. This left the hobgoblin Khan valuable time to strengthen his forces and prepare for any further adventurer incursions.
Posted by Rob_S at 06:41