Call of Cthulhu is a nifty game 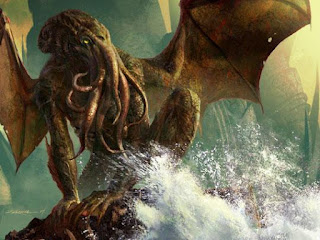 I didn’t play Cthulhu till I was out of high school. I’d been playing a number of ‘thespy’ White Wolf style games for a few years and got a kick out of the low power, ‘your doomed’ vibe the game gave off.

I dig playing the average Joe trapped in a terrible situation that gets progressively worse. The first character I played was an antique dealer who was thrown out of a window by malevolent forces, banished an evil spirit trapped in a roof space, sledgehammered a desiccated wizard to his second death before finally being consumed by a slime monster living in the walls of a mansion. In Gary’s current game I’m playing a detective with some incredibly low skills. I am amazed when I pass any sort of roll.

Which leads me to another point I really like about Cthulhu, the rules simplicity and transparency. With head butt 50% you can expect to land a blow with your bonce half the time. This coupled with the games rules light approach appeals to me. In the last three sessions I have rolled five or six times. The game has focussed on gathering clues, following up leads and asking pertinent questions.

In the last game we:

·       Learned the rumoured demise of the Carlyle expedition was greatly exaggerated.
·       The Carlyle expedition survivors want to open a gate to a madness inducing realm.
·       Cops are not always the enemy and may help you with useful information. Who knew? Rather than arrest us for fleeing the scene of a grisly murder the police helped us with additional information on a series of ritual killings before sending us on our way.
·       White folks in the 1920’s were awfully suspicious of Africans. No doubt they are up to no good with their voodoo witchcraft.
·       The Cult of the Bloody Tongue, based in a mountain hideout in Africa, are active worldwide. Surely they are guilty of killing my friend Elijah Jackson for getting too close to the shocking truth!

With just Roger and me playing we are going to have to be particularly cunning to come out of this alive. A trip to Harlem to see a Voodoo priest is on the cards. It’s a good thing we have back up characters.
Posted by Rob_S at 03:49