The Fane of St Toad 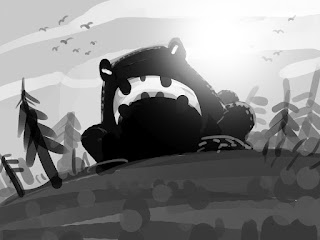 ‘Ugh, a little help here.’ - Osric as he confronts the formless spawn.

In a hovel on the outskirts of a pig farm Mugwort, lay-priest and seer of Tsathoggua the demon toad, clutched his forehead and writhed in pain on the muddy floor. Rance, a fellow lay-priest, looked on with concern. ‘What do you see Mugwort?’

His companion struggled to answer through teeth clenched in pain. ‘I see the temple defiled. The shrine to the holy amphibious trinity, to St Toad himself has been breached by heathens.’

‘I see them set out on a forgotten path to the Fane. A half elf leads an armoured oaf and a Halfling wench. He holds a tattered map. It leads to the most sacred of sites. The place we had long thought lost they have found!’ Mugwort became excited and leapt to his feet. “We must go there at once!’

Rance placed a calming hand on Mugwort’s shoulder. ‘Calm yourself brother. It would take us many days to journey there, if indeed your vision would be enough to guide us. This group you mention reminds me of the Westwood Warriors. Tsathoggua knows them well for they have crossed him before. They slew our high priest many months ago. You will recall the massacre in the tunnels of Enlandrin. Odd though for they are missing their wizard. Tell me what else do you see?’

‘The intruders cross the threshold. They examine each thing in turn, the murals, altar and sacred font but they do so carefully for they are no fools. They regard the idols with cowed reverence for they know Tsathoggua’s power in this place. They can feel it. They are the flies in the house toads. The half elf is called by the darkness of an alcove. He trembles before the sacred idol of K’Tehe the Destroyer. Curiosity gets the better of him and he prods the formless spawn of Tsathoggua that lies dormant in an offering bowl. The ooze bubbles into life. They have awoken the guardian and will pay the price.’

‘That is the end of them. No one can stand before the fury of the formless spawn of Tsathoggua. A fitting end I say…’

‘Hold your celebrations for the vision continues. They battle in Tsathoggua’s sacred hall. Their steel does nothing. I see the formless spawn splitting and now there are two. The heathens realize their insignificance before such an implacable foe.  The bewildered look on their faces is a blessing from Tsathoggua. The half elf flees like a craven. The armoured oaf retreats to cower behind a pit. Like desperate fools they assault the spawn with furniture, they push at the sacred oozing forms with pews and altars. Woe! Oh great calamity! The spawn have been cast into the sacred pit, pushed in by the ludicrous failings of the heathens.’

‘All is not lost brother. The formless spawn will rise from the pit and finish them. They are not so easily defeated.’

“Cruel injustice! I see the heathens tearing down the Fane's great stone doors. They are using them to seal the pit. The formless spawn is trapped! They continue to search and touch nothing this time. They venture down the stairs. I see them walk the corridors. They have found the breeding chamber. They squirm uncomfortably. The murals and the divine ideas contained within revolt them. Their tiny minds cannot comprehend what they see. They seize the wicked toad idol. It toys with them as it speaks to their minds.’

Rance ventured hopefully ‘Tsathoggua can be most persuasive. Perhaps one of them will turn. The rewards for service are great and the wicked toad idol and its power to enslave with but a thought is a worthy prize.’

‘Alas their hearts are steeped in detestable virtue. They do not heed the relic’s entreaties. They move again now to the crypts. The armoured oaf approaches a coffin. He removes the lid and is suitably punished for disturbing the righteous rest of the dead. The blessed of Tsathoggua, half toad and half man, assail them. Mummified, they absorb the blows of their foes. They seem impervious to the arrows of the half elf. The Halfling’s feeble gods will not answer her desperate prayers here in the heart of Tsathoggua‘s temple. They know they are doomed yet still they battle on.’

‘About time they perished. I could not think of a more suitable ending than to be slain by the blessed of Tsathoggua.’

‘Woe brother Rance! I see the blessed torn asunder by the hated armoured oaf and a simple spear thrust from the half elf. We are undone. The Fane of St Toad lies undefended. The heathens retreat but will not be gone long.’ Mugwort shook his head clearing it of the vision. ‘We must gather our strength and head to the Fane at once. Our god has shown me the way. We will put an end to these blasphemers once and for all.’
Posted by Rob_S at 03:12