Optimus and I managed two games of Rogue Trader and a game of Pulp Alley while he was in Aus. This scenario was a follow-up game to the whipping that was Vlad Kirby's enslaved Orks verse Silver Skull Space Marines.

Optimus had acquired some 90's Space Hulk tiles and was eager to use them. We mocked up Vlad Kirby's underground bunker and unleashed the 1st Ultramarine Combat Engineers, equipped with las-cutters and supported by fearsome dreadnoughts. Would they be able to withstand Vlad Kirby's psychic onslaught?

Vlad Kirby had successfully fended off a strike force of Silver Skulls, incensing the Marines orbiting the planet. The spiteful Astartes began an orbital bombardment, levelling the sector. Once they had finished their ship's astropath picked up a faint psychic signal. Vlad and his Orks had retreated underground. They would need to be dug out. 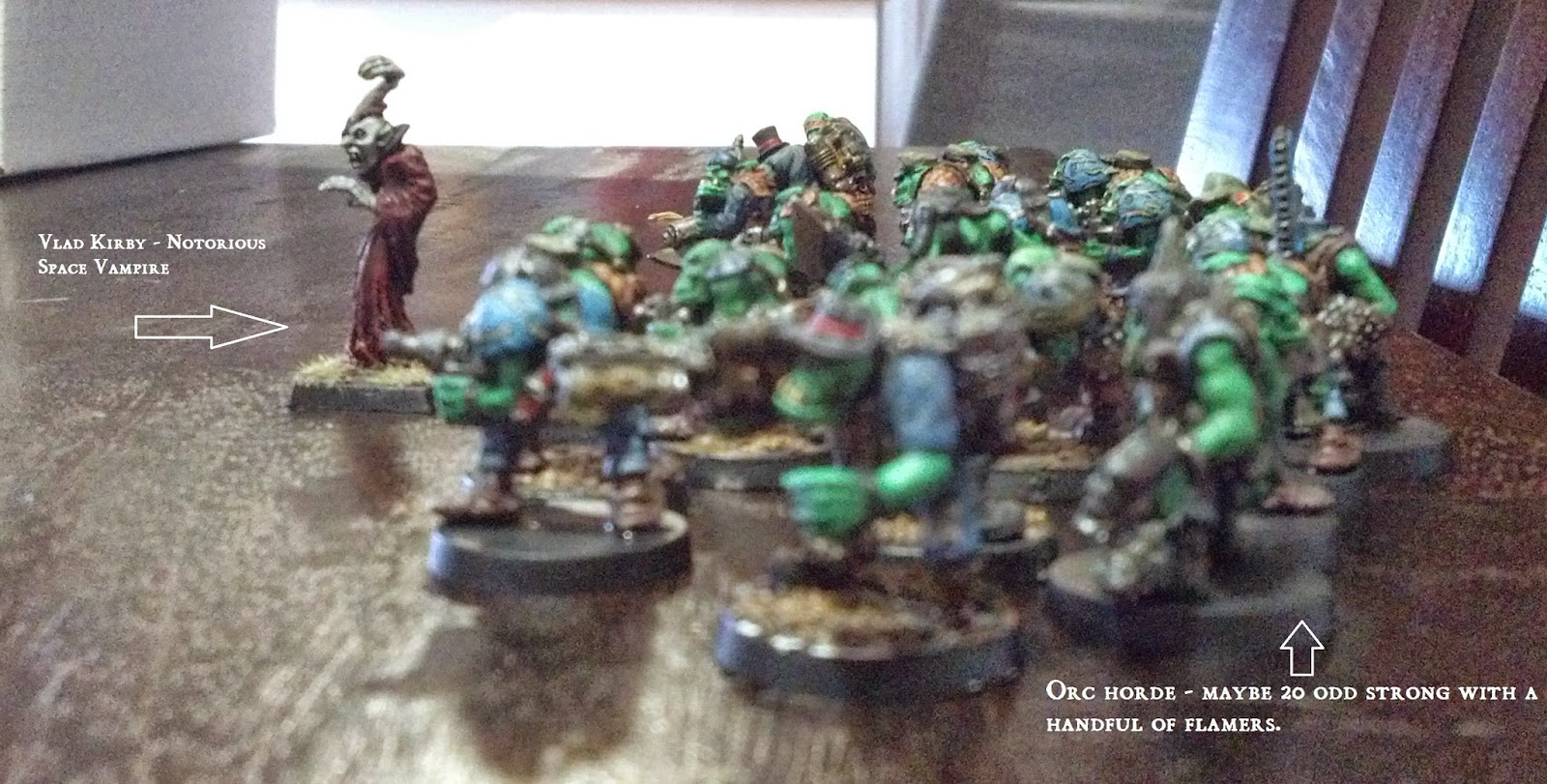 The 1st Ultramarine Combat Engineers, equipped with siege dreadnoughts, were shuttled to the planet's surface. They would not risk another teleport incident. Commander Gideon would lead them. He would play only a minor role in the skirmish.

The Ork's defences were scattered. They were unsure which tunnels the Ultramarines would breach and so they tried to guard all of them. The narrow corridors meant they could not repulse the marines with massed bolter fire. The killing was going to be up close and personal. 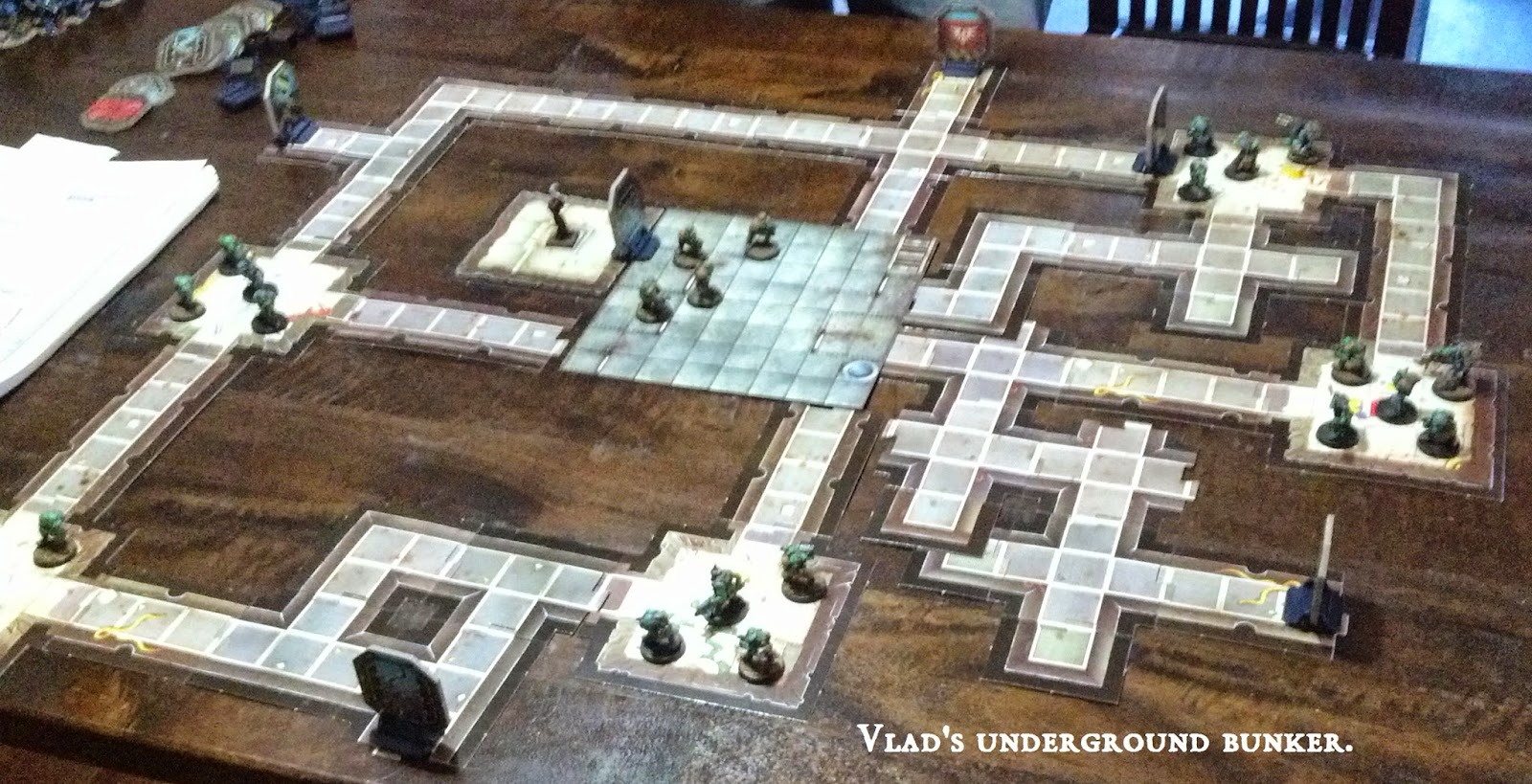 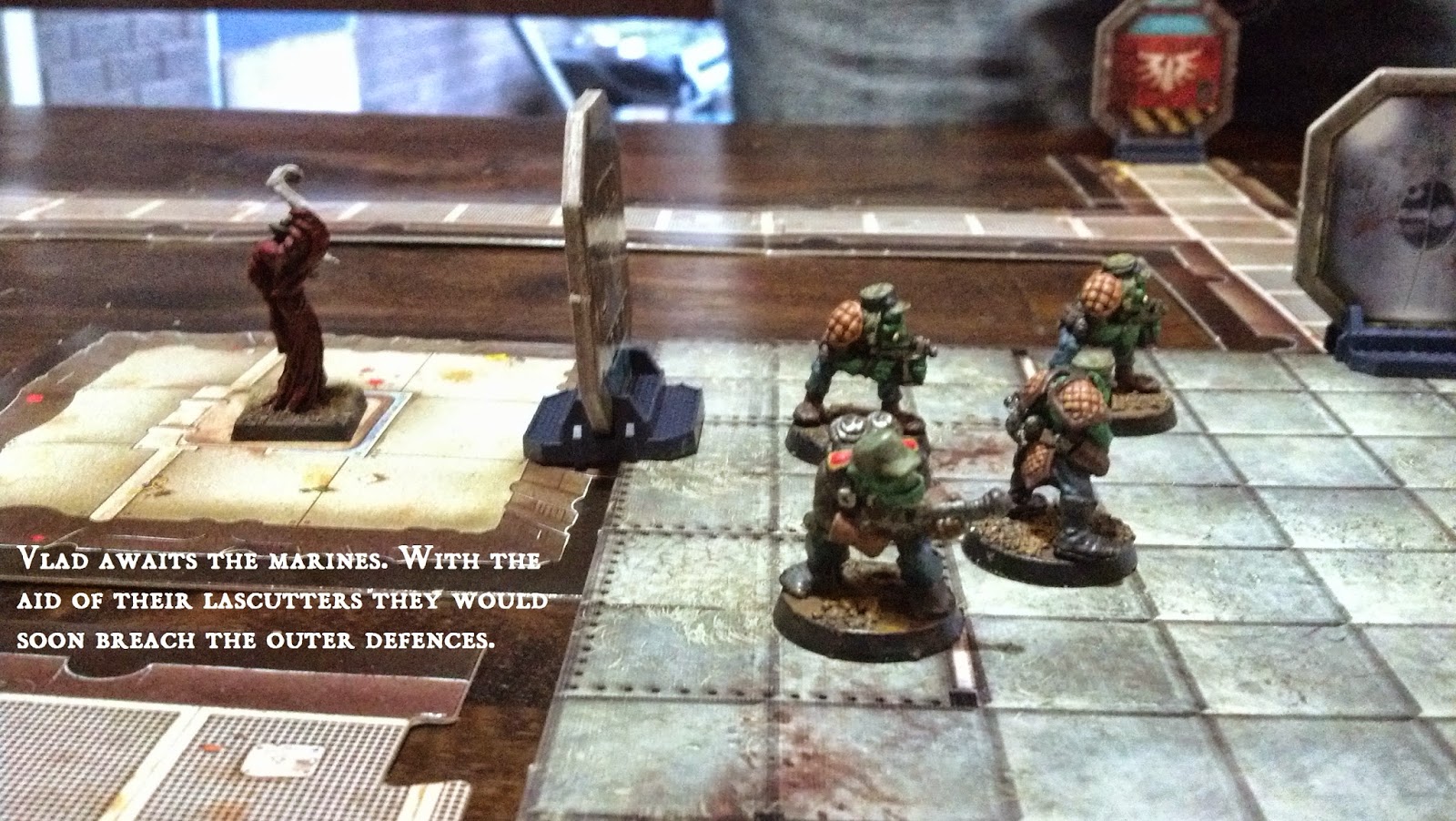 Vlad made his move. He raced down the corridors, intending to fry Eddie's mind. Meanwhile the Ultramarine squad in the northern tunnels moved to engage the Orks that were attempting to flank them. An Ork flamer lit up Brother Bethor, Brother Marius and set the siege dreadnought aflame. Ignoring the napalm licking its metal body the dreadnought launched a plasma missile at its foe. Superheated plasma washed over the room leaving nothing but charbroiled chunks of Ork in its wake.

Things looked grim and dark for the Orks. While bolters and flame throwers could theoretically damage the dreadnoughts the Orks were having no luck. It was up to Vlad.

Vlad could hear the sounds of combat, the whine of chainswords, howling Orks and the repetitive thud of explosive bolter rounds. He stalked through the tunnels towards the carnage and contemptuously stepped into the sights of Eddie. Vlad prepared to shrug off Eddie's twin linked bolters for the chance to fry the dreadnought pilot's mind. Eddie gave him everything he had. 2 twin linked bolters barked forth, both hit. 3 shells scored wounds. It was enough. Explosive bolter rounds detonated inside the chest of the Space Vampire leaving scraps of flesh spattered across the corridor. Commander Gideon, who up to this point had done little except punch an Ork's head off, celebrated his victory over the notorious Vlad Kirby by giving Eddie the dreadnought a high five.

Optimus (aka the one) can consider his honour redeemed after his Marines were routed last game. Dreadnoughts are tough and I chanced my arm facing down Eddie with Vlad. While the odds might have been with me, luck was not. The corridors called for non standard tactics. The Marines came up with the better tactical plan, using their dreadnoughts to spearhead their assault.

This was another challenging scenario. While tactics have played a part in both our recent Rogue Trader games, luck proved the deciding factor. Once again it was the strength of the scenario that keep things interesting, fresh and fun. Rogue Trader remains an excellent, characterful skirmish game.