Some models scare me. They look so neat, and there reputation for greatness is so well known that I end up scared to paint them in case I stuff them up. Jes Goodwin Ogres are in that league. The models below are close to how they finished up. Just a red wash on the leggings and a brown wash on the boots remained when I took the photos. I might go back and add a couple of mushrooms to the bases. I stuck to my safe palette but did branch out with the stripey pants.

I have heard it said that the old ogres lack a unified look. I disagree. I think as long as you keep a consistent colour scheme the group will hang together nicely. Two ogres down and two to go. 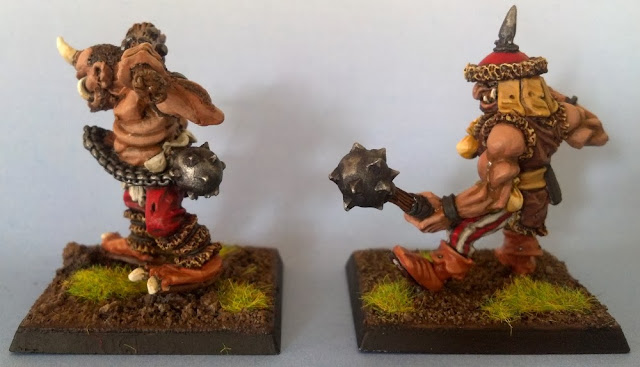 These next batch of models I finished around the end of November. I was hoping to photo them in the kitchen where there is more natural light but only recently got around to it. I experimented with green as this is not usually a colour I have confidence with. I used the secret weapon inks on the greens and above on the ogres flesh. They are tricky to use, I like to use them on the base coat before I highlight up. Don't use them as a wash though, just apply to the recesses directly.

My favourite model of the group is the poacher with the goose stuffed in his bag. I had read an earlier blogger looking to collect the set of miniatures that appeared in the colour plates in the Warhammer Fantasy Roleplay Rulebook. That sounds like a great idea but I am in no rush. I have plenty of stuff to paint over the Christmas break.