Episode 1 - The Enemy Within - Shadows over Bogenhafen

We met early November to continue The Enemy Within campaign. I blogged about part 1 Mistaken Identity - here. Shane joined the fun and was brought up to speed with Warhammer's Oldworld and his halfling smugglers place in it. 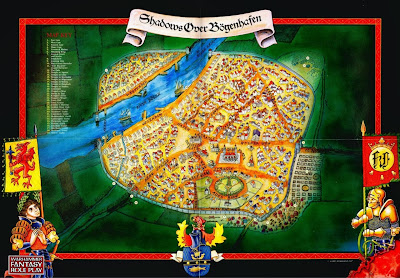 I recorded the session and it's a fun listen. You can hear what works and what falls flat. The recording was long enough that I broke it in two.

Key points from the first recording:

(01:06) Having survived an attack by the bounty hunter Adolphus in Wiessbruck, the protagonists sailed on to Bogenhafen with Joseph the boatman. They made good time and arrived the evening before Bogenhafen's famous Schaffenfest began. Walter sweet talked his friend Joseph into paying them an additional days wages. Esmerelda stressed that they had earned the additional pay as they did defend Joseph's boat from an attack by 'Crazed guys'.

(08:42) A crate of cheese, received as part payment for the 'Emperor's own crossbow' from last session, was sold to Joseph for a substantial profit thanks to the unforgiving haggle rules. It was surely 'Cheese destined for the table of the Emperor.' In fact 'The Emperor's Own ...' has become something of a catch cry for these heroes and an excuse to mark up prices substantially.

(09:51) Solomon, working for the halfling underworld, had also arrived in Bogenhafen to deliver some best quality Stygian spices just in time for the Schaffenfest. He delivered them to a halfling chef working at the Golden Trout, a high class restaurant catering to exclusive clientele. On the way there Solomon fell in with his old friend Walter and his companions.

(21:20) The group stayed at the 'Vexed Pig', a low quality dockside inn. Joten's paranoia served him well as he wedged shut the grimy window of his rented room which foiled a midnight burglary attempt.

(26:20) The group determined that the note addressed to Kastor Leiburung, Herdan the dimwitted grave wardens body double, was a fake. They worked this out when told the law firm Lock, Stock and Barl, who penned the note, did not exist.

(29:43) Walter negotiated a discount rate for the groups stay at the Vexed Pig by offering to perform a routine each night of the Schaffenfest. Solomon ingratiated himself with the kitchen staff improving the quality of their breakfasts. Halflings sure can do its cook.

(44:00) Key locations at the Schaffenfest, held just outside of town, were the jousts, fortune teller, various shops, a mobile court, stocks, a wrestling ring, livestock markets and Dr Malthusius' Zoocopia. There were rumours of an underground pit fighting ring but the band couldn't gossip up any additional details.

(49:57) Lady Talana, the inconsistently accented fortune teller, was consulted to the point of exhaustion. Various prophetic clues that seemed plausible were gained. The fortune teller would later be reported to the High Priest of Sigmar in the town. Solomon, who inadvertently dropped her in it, warned her to flee before she was seized by righteous Sigmarites.
(60:14) The Zoocopia was visited. An exhibit, the three legged goblin, made a dash for freedom but was 'stopped' by a brutal spear thrust from Joten. Esmerelda did her best to patch up the goblin while Dr Malthusius fretted over the viability of his stricken prize. Walter took a dislike to the Dr and yet somehow the group managed to swindle/blackmail free tickets to the show later that evening.

(70:45) Joten challenged the wrestling champion 'Crusher' in the hopes of winning a respectable amount of coin. The dice were cruel and he was trounced. Much of the parties gold is lost wagering on the outcome.

(78:28) Walter stirred up the crowd at Dr Malthusius' Zoocopia, heckling the Dr as he displayed a motley assortment of the amazing and grotesque. The three legged goblin succeeded in making a break for freedom while its handler was distracted by heckling from Walter. In the resulting chaos Walter used public speaking to incite the crowd to demand refunds.

(84:25) Oddly the crestfallen Dr asked the group to assist in retrieving the goblin who has fled into the sewers. The local magistrate offered to equip and pay them for dealing with the goblin.

(91:48) Part 1 ended just as the group prepared to enter the sewers. It seemed like a good place to take stock and grab pizzas and beers.
Posted by Rob_S at 01:58