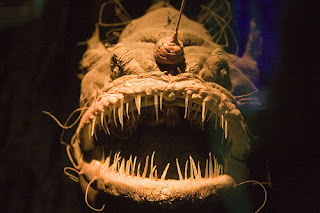 THE MAW - a sailor’s nightmare

THE MAW is the bane of sailors and terror of coastal communities. A series of luminous antenna draw the eye to the creature’s monstrous form.  Accompanying the creature is a cacophony of confusing sights and sounds. Its huge snaking body is formed from the fevered dreams of the mad. Hundreds of mouths can be seen gasping for air and press through the creature’s ethereal skin. These are the mouths of doomed sailors who perished in the belly of the beast. Their sussurous gasps only adds to the confusion.  THE MAW’s powerful lamprey mouth can breach the hulls of vessels with ease. Lashed to the beast is a barnacle-encrusted bell from a long sunken vessel. It’s discordant tolling, combined with the maddening spectacle, can unhinge even the soundest mind.

Due to its otherworldly composition THE MAW is immune to normal weapons. THE MAW fears and is vulnerable to flame. Those seeing the creature must make a save versus spells or fall under the effect of a confusion spell - see the custom confusion chart below. Those who fall prey to the confusion effect inevitably descend into cannibalistic madness.