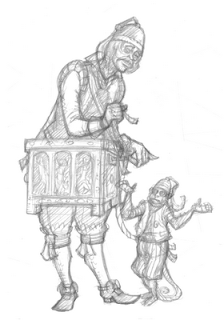 'I'd like some glowing balls.' - Milgos the dungeon scout.

A place by the hearth in Lord Winthrop’s grand hall had been set-aside for the bard. The perfect spot from which to regale the assembled nobility with stories of high adventure.

The troubadour cleared his throat loudly to garner the attention of those nearby. As he rose an expectant hush filled the chamber.

“Lords and Ladies. I bring to you the tale that has recently reached its nasty conclusion. I call it ‘Enlandrin’s Folly’.” Various nobles nodded with familiarity at the name Enlandrin. He had been a wizard of great power who had left the cities arcane guild in a storm of controversy. Rumors of necromantic experiments and devil worship had been vigorously denied by the mages guilds, and yet many felt they held the ring of truth.

“Our tale also involves the West Wood Warriors.”
A noble woman at a nearby table frowned at the name and called out “That name is terrible, surely they do not call themselves that. They sound like unkempt tree hugging vagabonds. They sound like they are in league with the elves.”
The bard looked apologetic. “Alas madam I fear that is the groups moniker. Thus named by a drunken sell sword, for the band had never gone to the trouble of naming themselves. Rest assured what they lack in creative titles they make up for in heroic deeds.”

“Our heroes found themselves returning to the domain of the mage Enlandrin that adjoined the tunnels and warrens of the sprawling local dungeon known as ‘The Darkness Beneath’. Milgos, the group’s scout, had found it hard adjusting to life as a human. His night vision was poor and so he took to carrying around a number of glowing balls to light his way. Milgos would prefer a blade in each hand should the opportunity to stab something arise and so his need to carry shiny balls vexed him. That is until he came up with a cunning plan. He would place a ball on his head. First he would fashion a conical hat and he would place his ball on the pointy end. He could then see where he was creeping and have both hands free for frenzied stabbing.”

"Milgos crept down the dank and dark corridors, his glowing ball shedding the bare minimum of light necessary for him to see and yet not alert the local denizens. Or so Milgos hoped. A call echoed down the tunnels alerting the group to danger. It was the scream of terror followed by the distinct raucous tones of desperate combat. All pretense of stealth abandoned; Milgos sped into a chamber. He was in time to see a rogue be smothered by an ochre jelly. The abominations touch dissolved the poor fools flesh. The single remaining member of the luckless band of adventurers stood in the centre of the room cursing in arcane tongues. Soon missiles of magic filled the air and streaked forth with unerring accuracy peppering the ooze. Milgos recalled from his studies in the mages academy, that such oozes could simply be hacked apart and so he leapt at the creature blade swinging. He was soon joined by Ugh and the pair carved through the jelly like our good Lord Winthrop carves through a desert.”

There was nervous laughter as Lord Winthrop’s guest turned to their host to see how he would take the slight. The noble gave the bard a stern look, a spoon full of custard half way to his mouth “Go on bard but try and leave out future japes at my expense.” Those gathered in the hall breathed a collective sigh of relief.
“Beg pardon my Lord.” The bard said before resuming his tale. “And so the mage was saved. He and Milgos traded academic titles each sizing the other up. Blodgett, for that was the mages name, had the audacity to try and hire Milgos and company promising them a 15% share of all treasure found. He was politely refused and was largely fobbed off by the accomplished heroes for his talk did not seem to match his observed ability. Oddly, while the mage was occupied retrieving the items and personal effects of his deceased companions, Milgos felt compelled to enchant the young mages mind. His motive remains unclear though he would later swear that it was for Blodgett’s own safety for a mage so full of himself and yet so obviously lacking in ability, well it would only be a matter of time. The exact reason for Milgos’ enchantment hardly matters, as later in this tale it would prove a sound move and Blodgett, an otherwise insignificant player in the world of sorcerers, would become something of a hero.
The band set out once more with Blodgett trailing behind.  They skirted a chamber, in which laired a specter of terrifying countenance. Pressing on they sought out tunnels that led south for Milgos had an inkling that Enlandrin’s sanctum lay in that direction. Soon they arrived at a door on the other side of which they heard mumbled conversation and witnessed the flickering of lantern light. Ugh splintered the door with one might kick. Beyond sat a trio of priests deep in their cups while behind them standing at attention were a handful of desiccated zombies. Battle was joined and it was swift and conclusive. The acolytes were soon slumbering thanks to a timely spell; the zombies fled clawing at the door with rotted hands as they were turned by the holy power of the bands cleric Jana. The nefarious high priest at least managed to look threatening. He drew himself up to his full height, raised his staff and shouted ‘SERPENTUS MAXIMUS!’ The staff’s head became that of a poisonous viper. An invisible Milgos then stabbed him in the spine. So ended the battle.

Of the two slumbering acolytes one was put to the sword. Ugh left his hound to worry the corpse and lap up the still warm blood. It seemed his callous streak had not left with the loss of his cursed helmet. The remaining acolyte was woken and put to question. He begged forgiveness and offered up his master’s location in return for his life. ‘To the south.’ The acolyte groveled ‘Enlandrin’s sanctum is to the south. Can I go now? I promise I shall no longer worship demons. I shall be good. You have my word.’ While disgusted at the sniveling on display the heroes were essentially good and saw no reason to murder the acolyte. He was spared and fled. The band took stock of their resources and decided to continue. They knew their prey was close. Enlandrin would not see out this day. But that my friends is a tale for another time. For the hour grows late and my Capuchin monkey is weary from accompanying me with his lute all this time.
Posted by Rob_S at 05:58